Every four years, what we think is the greatest sporting event on the planet comes along.  The Rugby World Cup.

In 2015 this event was held in England.  Along with celebrated New Zealand Chef, Al Brown, we had the idea to design and lead a totally unique travel experience to this global event.  We partnered with an official sub-agent of Rugby World Cup.

Recognizing that sport results don’t always go the way you want them to, our 20 day tour was as much about culinary experiences as it was about watching both semi-finals, the bronze final and the grand final of Rugby World Cup 2015.

We chose 3 of the greatest culinary cities in the world as the key destinations for Off the Bench:  New York, London, Paris.

Kicking off in New York, we immersed ourselves in the city through our friends and contacts there and had what was described as a ‘back stage pass’ to this amazing culinary city.

We then travelled to London, taking in the semi finals and sharing more never-to-be-repeated culinary moments with some of the great Kiwi chefs working there, including Peter Gordon, Hamish Brown, Miles Kirby and Anna Hansen.

From London, it was over to France for two nights in Paris and two nights in the alpine village of Le Chambon sur Ligon, all under the care and guidance of leading French chef, Stefan Reynaud. 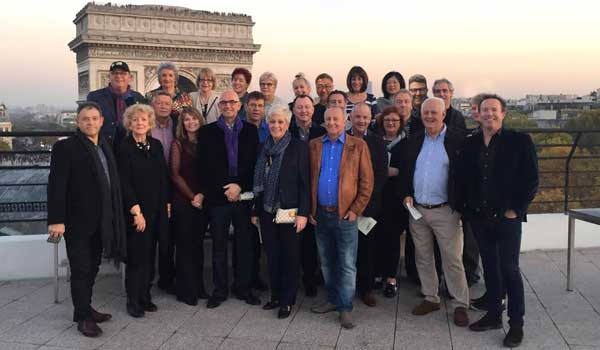 The final stage of Off the Bench saw us back in London for the all-important Rugby World Cup 2015 Grand Final.  The cake was iced.  The All Blacks lifting the Rugby World Cup once again. "This has been one of the great 3 week periods of my 55 years on this earth.  People, places and shared experiences over 3 countries have been truly memorable.  Friendships have been formed and solidified which will last the rest of time."
Dallas Fisher, Hamilton, New Zealand